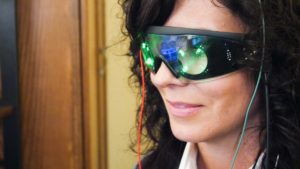 Quantitative Electroencephalography measures brain activity and compares it to a standard range of brain waves to determine the areas of activity that are out of the normal range.

Neurofeedback is a non-invasive therapy where brain waves are recorded by a computer program that compares the patient’s brain waves against normal brain waves. When a deviation occurs, the program uses visual or sound rewards to trigger a subconscious response in the brain and guides it back into normal ranges. This process is known as operant conditioning, where rewards for positive behavior or responses increase learning capabilities.

Neuro-mapping is a ground-breaking technology which enables practitioners to image the brain for precise information on abnormal areas then determine how to correct these abnormalities using neurofeedback.

How does Neurofeedback change the brain wave patterns?

By combining EEG Neurofeedback and photic stimulation the brain is gently directed into the correct pattern. The program uses visual or sound rewards to trigger a subconscious response in the brain and guides it back into normal ranges. Repetition of the sessions teaches the brain how to make these patterns permanent. Training brain waves into efficient patterns allows the central nervous system to learn how to self-regulate, directing it away from debilitating disorders and into optimal functionality.

Who can benefit from EEG Neurofeedback?

Patients diagnosed with ADD, anxiety, depression, and concussions have seen permanent improvement. Many cognitive situations that have not responded to medication or psychotherapy have been improved or resolved with neurofeedback. Even chronic disorders can show improvement.

Research has shown the following symptoms to be responsive to QEEG Training:

Neurofeedback does not specifically target any disorders. It changes timing and activation patterns in the brain. The goal of neurofeedback training is to slowly guide the brain back into normal, healthy ranges and reconnect neural pathways that have been disconnected. This improves brain regulation which impacts a variety of symptoms.

What are the steps in Neuro-mapping and Neurofeedback?

Next, the EEG recording is uploaded to a computer program where it is compared to a map within the normal range, adjusted to match age and gender. The Neuromap report identifies areas of the brain that are operating outside of the normal range and identifies the emotional and cognitive issues that correlate to those discrepancies.

A suggested protocol is generated which is designed to stabilize the area of the brain which is farthest away from the norm.

Neurofeedback sessions, usually 2 to 3 per week, implement the protocols. Sessions are approximately 30 minutes and involve watching a movie or listening to music while wearing photic light glasses. These glasses use light emissions to stimulate the brain and improve the effects of neurofeedback.

The brain is made up of billions of cells called neurons. Neurons send and receive messages within the body. These messages are electrical impulses which produce brain waves. QEEG brain mapping captures a window of this brain activity, analyzes the information and creates a visual representation for each part of the brain and each of the brain waves (Beta, Alpha, Theta, Delta).

Emotions are reflections of the energy in the brain. For example, excess Beta waves can produce anxiety or too much Theta can result in ADD. Training brain waves can enable the central nervous system to learn how to self-regulate toward healthy patterns.

How can I learn if the QEEG Training would help me?

Call to schedule a Mapping and Review of Findings. Dr. Christine will meet with you for the Review of Findings and explain what areas of deviation from the normal range your Mapping shows and how it correlates to the symptoms you are experiencing.

Who has been helped by the QEEG Training?

If you would like to experience all the benefits of neurofeedback therapy, call our office today (763) 208-5382 (Ham Lake Office) for an appointment!

Our doctors are committed to providing pain relief from a variety of symptoms and conditions so you can have a higher quality of life.